As of November 27th 2019, all federal agencies in Germany must be able to receive and process XRechnung. XRechnung is the German CIUS (Core Invoice Usage Specification), which originated from the EU standard EN 16931 . EN 16931 provides two types of XML schemas: Universal Business Language (UBL) and UN / CEFACT Cross Industry Invoice (CII). As a result, the ability to process CII and UBL documents is becoming increasingly important.

Companies that are contractors of public institutions must be able to create and send XRechnung. Furthermore, the billing format is also used in the B2B sector, which is why it makes sense for companies to make their ERP system fit for the creation, transmission, and receiving of XRechnung.

SAP ERP is one of the most popular ERP systems in the world but cannot create, convert or read documents out of the box according to the UBL standard. This means that without add-on modules, SAP ERP cannot work with the standard XRechnung and companies must look for suitable solutions.

The SAP ERP system cannot generate XML files from the SD and FI modules that conform to the UBL specification. However, a solution can be created by using middleware in conjunction with a service provider. The EPO Connector happens to be a middleware solution that is integrated directly into the SAP system and helps connect further external products and services to the SAP. This means additional functions can be added to SAP cost effectively without having to intervene in the system itself.

In the following, we’ll look at how to use the EPO Connector to create UBL files with attachments, and also send and receive them. 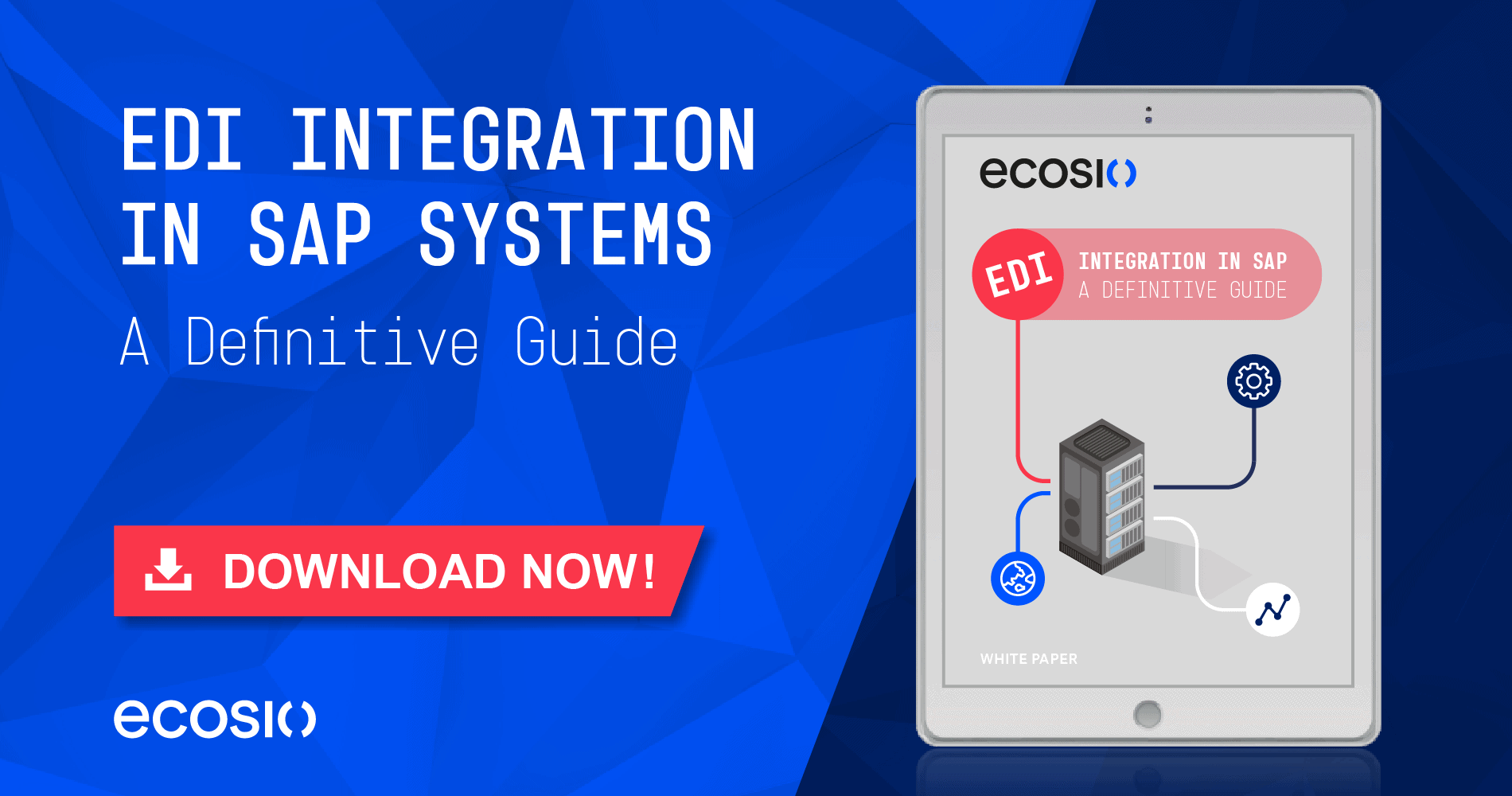 Create and send XRechnung with attachments

Using the EPO Connector, e-Invoices can be created in UBL format from SD and FI documents. Since the middleware is written in ABAP and thus runs directly in SAP, no external tool is necessary, and the invoice workflow can be completely mapped in SAP. In addition, the EPO Connector can be used to integrate attachments into UBL that are directly embedded as Base64-encoded character strings in the document. For this purpose, UBL has its own attachment elements (cac: AdditionalDocumentReference):

Extract of a Base64-encoded Attachment in UBL

The EPO Connector takes care of the correct coding and embedding of the desired attachments and creates the final UBL file according to the XRechnung specification. In order to be able to transmit the created e-Invoice to the recipient, a service provider such as ecosio can be connected to the middleware. ecosio reads out the sender and recipient ID as well as the document type and sends the invoice to the bill-to party via the required channel. This results in a consistent and seamless invoice delivery and invoice receipt process. Peppol (Pan-European Public Procurement Online), which was developed by the European Union to facilitate the exchange of data between companies and public authorities, must be used for the automatic sending of XRechnung. In this case, the service provider connects to the recipient’s Peppol access point, which receives the transmitted XRechnung and forwards them for processing.

Receive and process XRechnung with attachments

The invoice receipt process using the EPO Connector is like sending invoices. The EDI service provider receives invoices via the required protocols (e.g. Peppol) and transfers them to the EPO Connector, which controls the transfer of the documents to the SAP system of the company. Since SAP cannot work with the XML format UBL, the received documents must be converted to the required SAP format. The EPO Connector is responsible for the correct conversion and unpacks any attachments from the UBL.

Invoice Book for Incoming Invoices Provided by the EPO Connector.

These attachments are appended to the final SAP document and can be viewed in the system as usual. The approval workflow can now be started in SAP and invoices released accordingly for payment. 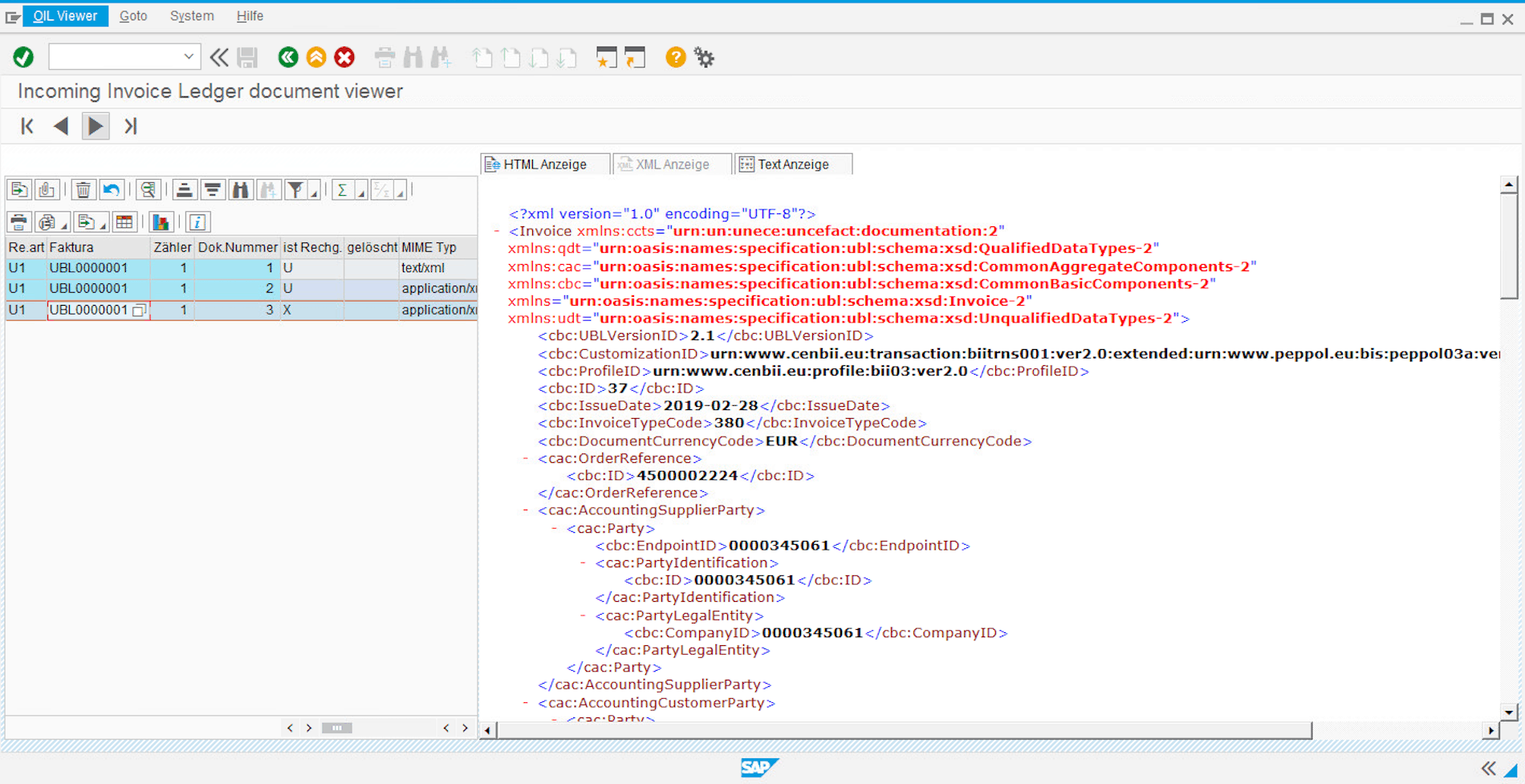 In the Document Viewer

Transmission of UBL invoices by ecosio

Thanks to ecosio’s connection to the SAP system, documents can be sent in various structured formats via all common EDI protocols. In addition to the usual document exchange protocols such as X.400, AS2, SFTP, SMTP, OFTP2, as well as EDI networks such as GXS, INOVIS, etc., files can also be accessed via special platforms such as Peppol, FACe (Spain) or the Sistema di Interscambio (Italy).

This makes it quick and easy to send and receive UBL documents via the Peppol network. 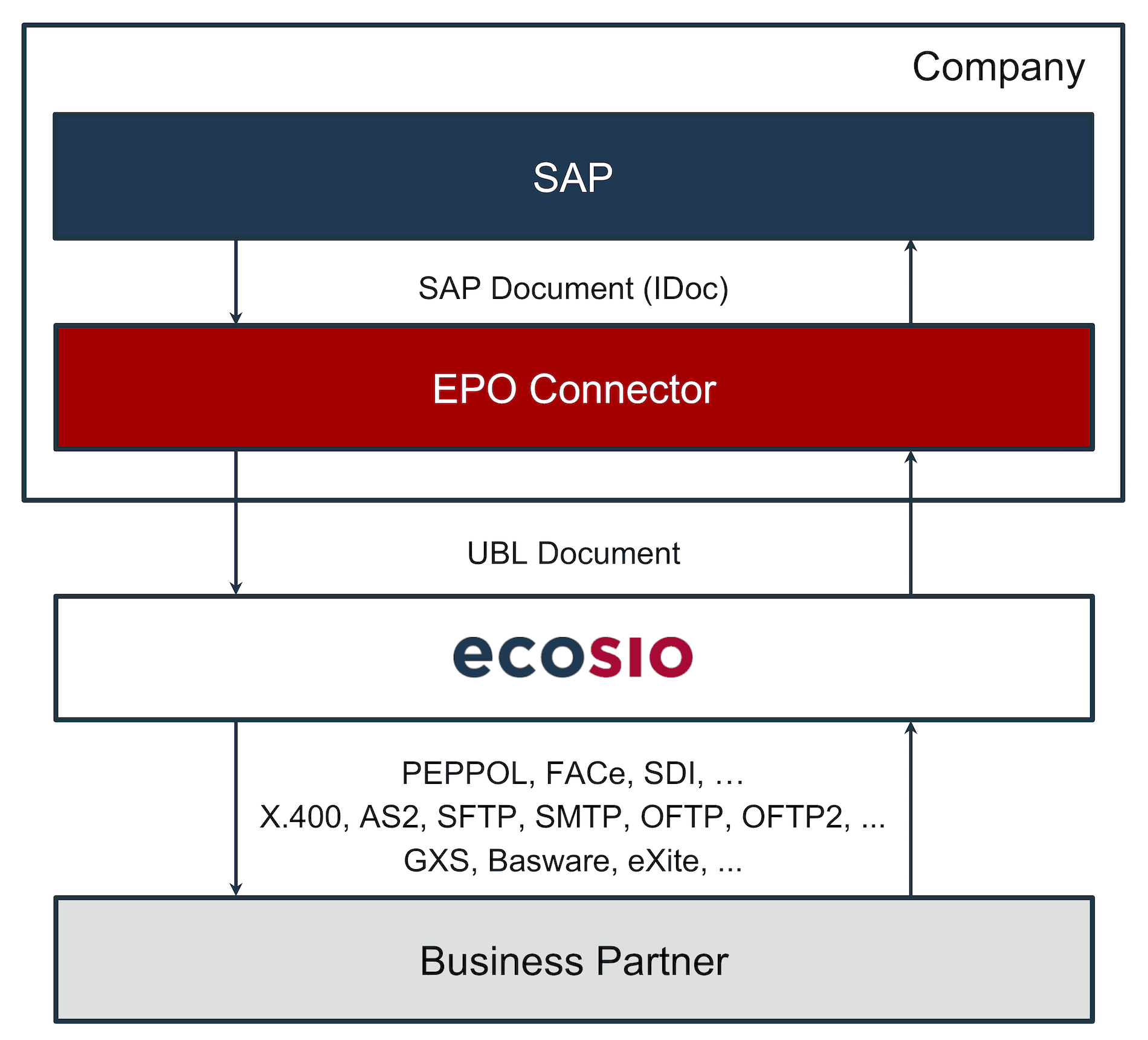 Since ecosio allows the connection of any partner via different protocols, companies do not need to worry about expensive special programming in SAP. In conjunction with the EPO Connector, companies stay up to date with the technological requirements surrounding EDI and can focus on their core business.

The EPO Connector allows companies to convert invoices in SAP into XML format UBL and add attachments. Likewise, UBL documents can be received, converted into an SAP format and then edited. In conjunction with ecosio, the generated invoices can be sent via all standard exchange protocols. It is also possible to send and receive XRechnung via Peppol with ecosio.

Thus, companies are not dependent on expensive additional software for SAP but can pursue a long-term and cost-saving strategy to meet the ever-increasing requirements for e-Invoices.

Do you still have questions about UBL documents in SAP and how they can be created and sent? Feel free to contact us or check out our chat, we would love to help you!

Subjects
EDI Standards
IDoc
Mapping
Peppol
Routing
SAP ERP
UBL
XML
XRechnung
Stay up to date with the latest news on EDI, B2B integration and e-invoicing Follow us on LinkedIn
Back to overview 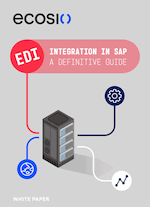