Once you have decided that you want to start exchanging EDI messages with your partners it’s important to consider exactly how you wish to send/receive this information. Two key things to be decided here are your preferred document standards and EDI protocols.

In this article we will look specifically at the four most commonly used EDI protocols: AS2, OFTP2, HTTP and REST APIs.

What is an EDI protocol?

An EDI protocol describes and defines the exchange of data between computers and is used by the communication software/application. In essence each protocol is like a separate language, as unless the trading partners are using a VAN, the computers of both parties must use the same protocol in order to communicate.

The chosen protocol also determines the level of message encryption, what software and hardware will be required and the ease with which transmissions can be received (i.e. whether both sides’ machines have to be online at the same time for message exchange to occur or not).

Although EDI can theoretically be conducted between two partners via any electronic method capable of transmitting the relevant information, the vast majority of EDI today is conducted over the internet. With the emergence of new technology came the need for standardised protocols. Naturally, over the past few decades the number of these protocols has increased. Thankfully, however, most supply chain organisations today use one of the following exchange channels:

First established in 1991, HTTP, or Hypertext Transfer Protocol, is a well-known and popular file transfer protocol. Since its inception four subsequent updates have been released, with the fifth and latest (confusingly called version 3.0) having come out in 2018.

As it only requires a web browser and no additional installation, HTTP constitutes a simple method of completing person to server and person to person file transfers. As anyone who uses the internet is likely to recognise, HTTP resources can be easily located on the network through URLs (or Uniform Resource Identifiers).

The downside of HTTP’s simplicity is the lack of security it offers, however. Although not as prone to firewall issues as File Transfer Protocol (FTP), HTTP is unable to secure data or meet regulatory measures. Due to the security disadvantage plain HTTP is therefore not recommended and at least the use of HTTPS with TLS (transport layer security) should be considered. Similarly, as HTTP doesn’t offer users the ability to receive receipts automatically, it is lacking when it comes to message traceability.

AS2 (or Applicability Statement 2) rose in popularity drastically after the turn of the millennium following the move by Walmart to require its suppliers to use it. Many other large retailers followed suit, meaning AS2 quickly became the most popular EDI protocol across many industries for point-to-point connections.

Unlike many other protocols, AS2 was developed specifically for B2B document exchange. As a result it offers several advantages over HTTP, including better security and the ability for acknowledgements and transactions to happen in real time.

AS2 uses the HTTP(S) protocol to send EDI messages through an encrypted tunnel. In a standard AS2 message files are transmitted as ‘attachments’. All file formats can also be handled and messages can be signed to provide authentication if required. As virtually no ERP system offers inbuilt AS2 capability, however, this must be integrated separately. To do this requires detailed knowledge and can lead to long troubleshooting if the administrator is not well versed with AS2 and its functionalities.

In order to improve traceability AS2 requires receipts, or Message Disposition Notifications (MDNs) to confirm message delivery/receipt. In contrast to AS1 and AS3 protocols, AS2 offers multiple MDN return options, including the ability to return synchronous or asynchronous MDN..

Thanks to its compliance with the Health Insurance Portability and Accountability Act of 1996 (HIPAA), AS2 is particularly popular in the healthcare industry today.

Like AS2, OFTP, or ODETTE File Transfer Protocol, was specifically designed for B2B document exchange by the Organisation for Data Exchange by Tele Transmission in Europe (ODETTE) in the mid 1980s.

In 2007, the OFTP2 protocol was developed specifically to be used over the internet. This update included important improvements over OFTP such as improved data security (via exchange of digital certificates) and the capacity for high compression.

In addition to allowing for very secure exchange of high volumes of data via dedicated servers, OFTP2 is remarkably simple to use compared to other protocols, with only 14 commands.

Crucially, unlike with AS2, with OFTP it is possible to push and pull information (rather than just pushing). It also gives the user the ability to request signed receipts, further improving data security.

For temporary issues, OFTP2 offers transmission restarts. This is preferable to the alternative method of causing an error and aborting the session, which in turn requires the message to be resent in a following session.

OFTP2 is widely used in the automotive industry in Europe, though is also popular across retail, manufacturing, banking and government industries among others.

An API, or Application Programme Interface, is a combination of rules and mechanisms which dictates how two endpoints are able to interact and share information.

In theory data exchange via APIs offers a great advantage to businesses as it allows for free access to important B2B data without the need for participation of the partner or availability in the moment of transmission. Once an API has been set up, data can be accessed instantly and whenever convenient. Companies are also able to ensure a high level of security by the ability to restrict access as required.

As there is little standardisation or restriction surrounding how APIs should be created and used, however, using APIs for B2B data exchange can become difficult the more partners your business has as you effectively have to reinvent the wheel for each connection. Unlike with AS2 or OFTP2, which adhere to predetermined standards, APIs can be used in different ways. For example, one trading partner could request to pull the files, one only accepts pushing files onto his server and yet another a mix of both approaches. Similarly, the semantics of the data being exchanged is also not standardised with data exchange via APIs. Whereas traditional EDI protocols rely on universally accepted document standards (e.g. EDIFACT), this is not the case with APIs, meaning each connection requires additional work. APIs can be very useful for EDI, however, as we explore in more detail here.

REST, which stands for Representational State Transfer, is not a protocol itself, but rather a common method of writing API. APIs themselves lack a uniform structure. Instead structure is created through messaging formats such as JSON. Like AS2, REST relies on HTTP(S).

What is the simplest way to send EDI messages via these protocols?

For small and medium-sized suppliers, by far the easiest solution for trading EDI messages is to use an EDI service provider – or VAN (Value Added Network).

Unfortunately, setting up point-to-point EDI connections is a complicated process and requires a lot of technical expertise. Plus, although certain protocols are favoured by particular industries, as your supply chain grows you will undoubtedly encounter requests to conduct EDI over different exchange channels.

By selecting a fully managed EDI solution all connection issues are taken care of by your provider. With just a single connection to ecosio’s Integration Hub, your business will be able to send automated messages to your entire partner ecosystem… and any future partners. In addition to allowing you to experience the cost benefits of fully automated EDI, this approach completely removes the responsibility for establishing, monitoring and troubleshooting your B2B message exchange processes, leaving your staff free to focus on more value-adding activities.

For more information on EDI protocols and how to get started with B2B data exchange automation, contact us today.

Subjects
API
EDI Introduction
EDI Protocols
OFTP2
Stay up to date with the latest news on EDI, B2B integration and e-invoicing Follow us on LinkedIn
Back to overview 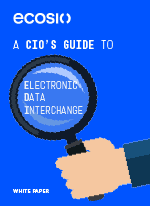 Choosing an EDI Platform - A Breakdown

Looking for advice and information on EDI platforms and what what to look for when deciding between the various options? Look no further!

A Guide to Efficient EDI Systems

In this article we break down what an EDI system is, what different types of system offer, and things to remember when selecting a solution.

EDI Integration: What is It and How Can It Help Your Business?

Efficient EDI integration can have a transformative effect on your business. Read our article to find out how it can benefit you.

Errors involving EDIFACT party codes (or EDIFACT parties) are a key cause of master data issues. Find out why.

What is Master Data Synchronisation and Why is it Needed?

Find out how conducting a master data synchronisation can make everyday EDI exchanges and partner onboarding easier and more efficient.

Are you aware of what modern EDI systems can offer? In this article we explore the recent trend towards fully managed solutions.

The Three Most Common EDI Pitfalls

While EDI can offer substantial benefits, achieving the perfect solution isn't always easy. Read our article to find out where many go wrong.

In this article we explore five current EDI trends and the extent to which they reflect the future of EDI more widely.

What is full service EDI (AKA fully managed EDI), what benefits can it offer your business and is it really the future of B2B integration?

How Easy is Handling EDI In-house?

Handling EDI in-house may seem like a simple solution, but do you know what setting up and running an EDI system really entails?

What is EDI (Electronic Data Interchange)?

What is electronic data interchange? How does it work, and what benefits can it deliver for your business?